As this is my last post for 2012, I thought I’d look back on some of the highlights of the food and restaurant scene in Birmingham and Warwickshire.

Scooping awards and accolades – The Malt Shovel in Barstoncelebrated being named Warwickshire Dining Pub of the Year in the 2013 Good Pub Guide.  Pub Restaurant Chef of the Year was Rob Hartwell from Rose & Crown in Warwick. The Bluebell Henley in Arden won Good Food Guide Readers’ Restaurant of the year for the Midlands. Blue Bistro in Coventry was awarded Best Newcomer in the Warwickshire Life Food and Drink Award and Peel’s in Hampton Manor were awarded Best Restaurant of the Year. Restaurant Bosquet in Kenilworth (with chef Bernard Linier pictured below) impressed Birmingham Post’s Richard McComb to pick up a McComb Award for Dining (MAD).

Birmingham’s reputation as a fine dining city continued with Purnell’s named the BMW Squaremeal Best UK Restaurant. Lasan and Simpsons were included in the Sunday Times Top 100 Restaurants of the Year, as voted by Harden’s readers. In Restaurant magazine’s Top 100 Restaurants in the UK Loves featured. Purnell’s, Simpsons and Turners all retained their Michelin stars.

The region’s hotels saw significant investment and heavyweight chefs drafted in to support new openings. Marcus Wearing consulted on the menu for Hotel La Tour’s Aalto restaurant, where I became a fan of their afternoon tea.  Hogarth’s completed a £4m make-over and chef Martin Blunos was appointed as Culinary Director. 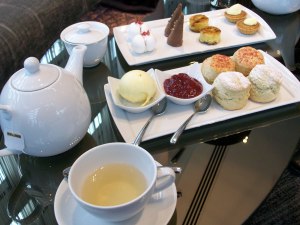 The popularity of single ingredient restaurants spread from London to the Midlands. High quality steak and chicken cooked well won new customers for the New Inn in Harborne and The Flat Chicken in Stratford. Barbecuing meats was the hottest cooking trend of the year, with the openings of Argentinian Fiesta del Asadoon the Hagley Road and Brazillian Rodizio Rico in The Mailbox.

The competition for the most glamorous makeover was a tie between The Warwickin Hockley Heath and The Star & Garter in Leamington, which was given a £500K make-over by the Peach Pub Co.

In the culinary Olympics it was a cook-off between the French and Italians. Funky brasserie Le Truc Café and Purnell’s Bistro opened to give Brummies a Gallic twist to their dining. While the award-winning San Carlo Group launched Fumo in Waterloo Street. The cocktail bar, restaurant and late lounge serves small dishes of Venetian tapas known as Cicchetti (pronounced chi-KET-tee).

Chefs on the move included Solihull chef Mathew Ebdon joining The Beeches in Hampton in Arden and it was all change at Edmunds in Brindleyplace, who welcomed Dider Philipot to head up the French fine dining restaurant as Andy Waters left to run the restaurant at The Queens at Belbroughton Worcester.

The sunglasses and crowds came out for food festivals. Kenilworth followed the successful Stratford and Leamington food festivals by launching their first Foodie Fortnight promoting local restaurants and food producers. I went to the Chilli Festival in Brindley Place for the first time and admired how the contestants kept their cool, as the torture of hotter and hotter chillies were administered. The Colmore Row Food Festival returned for a second year and filled Victoria Square with tasters from local restaurants including Saffron and Opus. 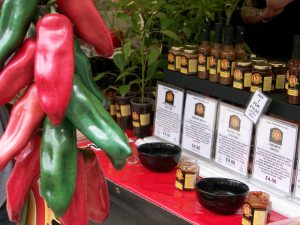 In Leamington Spa Restaurant 23 moved to bigger premises in Holly Walk and the bar/ restaurant / club Altoria opened its three floors to diners. High Pavement in Warwick and The Lazy Cow in Stratford were welcome additions to the towns’ dining offers.

Going to events meant that I was able to meet lots of local producers. I met the Mini Jar Company and Napton Water Buffalo Company at the BBC Good Food Show Winter, Tan Rosie and cheesemaker David Jowett at the Stratford Food Festival and  Jabberwocky at the Leamington Food Festival.

Our regional food sector is thriving and I hope that my blog has highlighted how easy it is to shop local, eat local and support Warwickshire’s food heroes.